Exclusively for the Baddyforum International, the art historian and curator Valérie Hammerbacher explored the subversive practices of Baddy Dolly Jane and examined the question of her revolutionary potential as a rebel.

With the concept of ‘disobedience’ we readily associate communards and student protests in recent history. But the phenomenon of disobedience precedes them. One could even term it ‘classical’. When the Venetian painter Paolo Veronese had to answer to a court of law in 1573, he invoked this very concept of artistic self-determination in his defence: “We painters take the same license poets and jesters take”, ran the opening of his speech before the Venetian tribunal. The accusation: In his depiction of the Last Supper there is massive personnel populating the scenery; yet Christ and his disciples were thus reduced to marginality, displeasing the commissioner, the Dominican Abbey of S. Giovanni e Paolo so much that a formal complaint was filed. Veronese spoke of the independence of the arts and evoked a fundamental theme of all creative activity: Everything is allowed if it is adequate for one’s own artistic truth. Unlike Veronese, the performer Baddy Dolly Jane is under no threat from the Inquisition. Still, her public interventions during cultural events prompt a revisiting of such commonplaces as the freedom of performance, images and so forth.

Is it agreeable to do disagreeable things? To anticipate the dénouement of Baddy Dolly Jane’s performances: Any perturbation is eliminated! This could be the subtitle of Baddy’s interventions. Wherever she scents nonsense, hypocrisy and dubious scheming in the art world, the fighter strikes.

Baddy Dolly Jane is a strategist devoted to criticising institutions. Her subversive interventions are the tools with which she attempts to uncover deadlocked rituals and power structures. She shatters established role ascriptions in order to make them visible as conventions. Her work makes it clear that the versed players of the culture industry are suddenly rendered helpless, irritated, vexed and aggressive when confronted with their own press releases and postulates, when that which they demanded in their speeches until just a few moments previously, actually occurs: namely artists who take the license of poets and jesters.

Baddy Dolly Jane’s actions are often underscored by similar rituals. Whenever the artist occupies power territories, she triggers strong reactions. She reveals the stern regiment by premeditated breaches of its regulations. Through artistic disobedience she rebels against the rules of the smooth flow, and this refractoriness, devoted as it is to the freedom of the spirit, causes pain!

During the exhibition “Bad Painting, Good Art” in September 2009, the Museum of Modern Art, Ludwig Foundation in Vienna provided the setting for one of her first appearances. Complementary to the exhibition, the museum hosted a discussion about ‘Making the right people angry’, with the star painter John Currin from New York, whom the announcement recommended as ‘the bad boy of the art world’, and whose erotically tinted paintings the museum was showing. Baddy Dolly Jane turned up during this discussion and, mingling with the public, she eventually did that for which she is feared and famous: She entered the session and in an instant had drawn all attention to herself. When the panel discussion ended, the curator encouraged the public to ask questions. For Baddy Dolly Jane this was the cue for an unusual singing interlude. To the sound of the classic cabaret-song “Money Makes the World Go Round”, Baddy Dolly Jane stood up and addressed the artist: ‘John, why don’t you show us the dough?’ Subsequently she sang a modified version of the lyrics as ‘money makes the artworld go round’ and attacked the artist with a crooked cucumber. The curator reassured the artist: ‘Just keep calm, you are doing a great job, John!’

Meanwhile Currin was paralysed from shock – the ‘bad boy’ had been domesticated at the sight of Baddy Dolly Jane’s packed sexual power. Under the distraught gaze of the spectators, she skipped around, following a well-practiced choreography, until she finally plonked a cleanly plucked soup chicken filled with clinking coins onto the artist’s table. Relieved, Currin commented: ‘I expected a pie in my face’. Well, he got lucky – not only because he was spared the pastry-attack, but because he had witnessed a legendary happening which thousands were to watch on Youtube.

Stage: The Burgtheater in the Akademietheater

In the Viennese Burgtheater, Baddy Dolly Jane refused to make do with the role of the passively listening part of the public and opted for the role of the actor: The play “Fantasma”, presented by director René Pollesch, much hailed in the press and other media for his “anarchy” theatre, was just what she had been waiting for in order to stage her performative one-act play: During the ongoing performance, the artist blew up the scene, armed with a megaphone. Leaving her seat, she entered the stage and put on the performance of a public’s advocate, militating for a more innovative theatre that was willing to take risks. ‘Anarchy control! State-certified anarchy control!’, she repeated and summoned the public to join her in measuring the play against its own goals. René Pollesch had demanded the ‘dissolution of boundaries’ through theatre, and that was what Baddy Dolly Jane wanted to see.

Just five minutes back, the actors had repeatedly insisted on ‘a radical change of perspective’: ‘something unexpected should happen on stage’. Yet her creative attack irritated the performers, Sophie Rois and Martin Wuttke, depriving them of their power to act. Instead of reacting to her performance with some improvisation, they succumbed into connivance, finally taking refuge backstage. Meanwhile, Baddy recited Goethe, Hölderlin and Kropotkin, the spiritual father of communist anarchy. In the meantime, a crisis committee of actors and theatre employees had formed behind the curtain. The public reacted to the artist’s intervention with cheering and applause. But then the system struck back: Fifteen minutes later members of the staff were dragging Baddy Dolly Jane off the stage.

In honour of Baddy Dolly Jane, Esslingen, as her native town, hosted the exhibition “From Leonardo to Baddy Dolly Jane” and features her birth house, complete with a documentation centre [cf. p. 140]. The exhibition celebrated Baddy as a radical artist, the exhibits tracing her evolution. The opening took place in the garden of the Municipal Gallery in the Villa Merkel, a prestigious cultural institution in southern Germany, which also incorporates Baddy Dolly Jane’s birth house.

On the morning of the opening, she strutted around the cultural institution, displaying the stern countenance of a British monarch and accompanied by an entourage of her PR-agent, a flock of fans and a film crew. At the same time as her show, the Villa Merkel, which serves as a stepping-stone for numerous international artists, was hosting another exhibition opening for two German artists.

Baddy had heard of the inconsistencies regarding the financing of the institution. Additionally, the relationships between the director of the Municipal Gallery, the mayor, the artists, and the curator intrigued her. As the mayor started his speech during the opening, Baddy unleashed her attack. She began to blow up the speech, snatching the manuscript from the speaker while shouting: ‘This is the wrong text!’ She offered him a eulogy – on herself, of course – for further declamation. The result: After some arguing with the director of the Villa Merkel, the curator removed her, legs kicking, from the premises. The troublemaker had been eliminated, but the ritual of the opening had already been destroyed.

Should one be walking the streets of London with a loaded gun? The artist did just that in one of her most notorious interventions, in order to commit yet another act of artistic disobedience. This time, the crime scene was the Tate Modern in London.

On the occasion of Francis Alÿs exhibition ‘A story of deception’, she walked through the city of London armed with a gun. Incidentally, in London, unlike in Mexico City, even the selling of toy guns is prohibited.* Her way leads her from Fleet Street to the Millennium Bridge and the Tate Modern. In front of the city’s surveillance cameras, she uses her gigantic breasts to cut herself a swathe through the crowds of tourists and city-boys. Her target: A lecture by the title of ‘Comrades of time’, given by Boris Groys, the New York University professor, communication scientist and Stalin expert in the context of the Alÿs exhibition.  After the opinion leader had been introduced to the public as a ‘big mind’, he mumbled in officialese idiom about teleology and the culture of procrastination. ‘In the dark space, we dream that somebody brings the public to move, to activate the public. It never happens, of course’. Unwittingly, the speaker thus pushed Baddy Dolly Jane’s intellectual buttons. As the respective catchwords were uttered, she was awoken, just like many of the dozing spectators. The shrill, unmistakable ringing of the giant alarm clock had set her off. A kind of artistic early warning system, devised in the spirit of the blank cartridge fired from the bow canon of the battleship Aurora, that, in 1917, gave the starting signal for the October Revolution. Baddy was driven to the stage: ‘You thief! You have stolen my time!’ Gun in hand, handcuffs in her belt, she shouted: ‘Call the police! This man has stolen my time!’. To avert further harm, Groys’ wife rose from her seat in the audience and screeched: ‘Piss off, you slut!’ But neither her bickering voice nor the beseeching admonitions of a Tate Modern curator who had come to the rescue were able to prevent Boris Groys from being apprehended with the help of Baddy’s handcuffs. ■

* Francis Alÿs is a Belgian artist who lives in Mexico City. In one of his best-known video works, ’Re-enactment’, he buys a gun and walks through the streets of Mexico City. 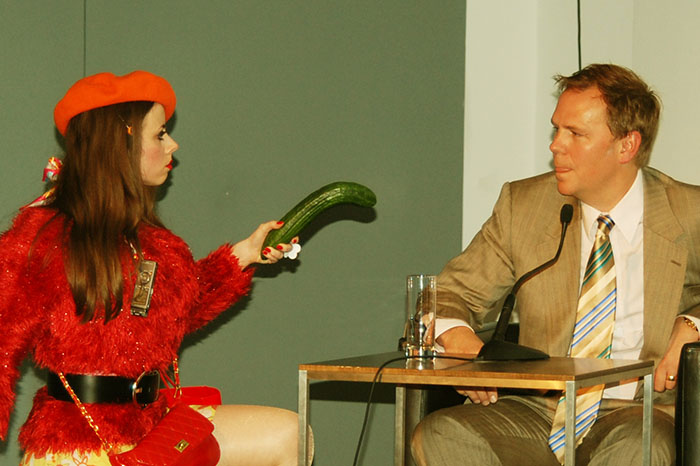 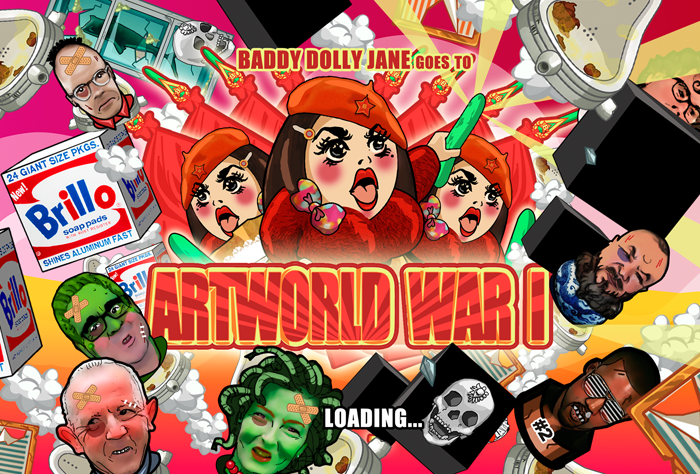 Artworld War I — The wet dream of all art haters

By
Swiney the Art Pig

By
Valerie Hammerbacher
Back to blog

Get Our Monthly Newsletter, Directly Into Your Inbox!

Thank you! Your submission has been received!
Oops! Something went wrong while submitting the form